A Passion For Music

Working For Police Reform and to Save the I-Hotel

Being Targeted by the FBI For His Activism

Pat was primarily responsible for developing PACE’s philosophies, recruiting members and building relationships with both on-campus and off-campus organizations.  Pat embraced the concept of self-determination and used concrete visuals to explain it so people could relate with the causes and purposes of the organization.  Pat explained:

“Self-determination was probably the closest (term) to making other people understand what we were trying to express.  Because when you had to explain self-determination, you had to explain the other side, against what?  Then that also led toward the oppression, the lack of opportunities and alternatives, and because of that, there was a lack of self-determination.  So that buzzword was just convenient to open up all the doors in arguments or discussions.  I declined a lot to use that word in those days in articulating to people.  I thought it better to express to them how what we were doing was going to help.  I would say it in different forms…how what we were doing would help kids get in school, get jobs, good shoes on children, very visual things that they could relate to.”

PACE recognized the inequality Filipinos faced was rooted in racism and joining with TWLF would create a greater consciousness within SF State, but more so within society, enabling Filipinos to control their own destinies.  This viewpoint was expressed in the “Statement of the Philippine-American Collegiate Endeavor (PACE) Philosophy and Goals,” which Pat authored and read:

We seek, as members of P.A.C.E. of San Francisco State College, simply to function as human beings, to control our own lives.  Initially, following the myth of the American Dream, we worked too to attend predominantly white colleges, but we have learned through direct analysis that it is impossible for our people, so-called minorities, to function as human beings, in a racist society in which white always comes first and anything else is synonymous with enemy, no matter what the attainment, educational or otherwise.  So we have decided to fuse ourselves with the masses of Third World people which are the majority of the world’s peoples, to create, through struggle, a new humanity, a new humanism, a New World Consciousness, and within that context collectively control our own destinies. 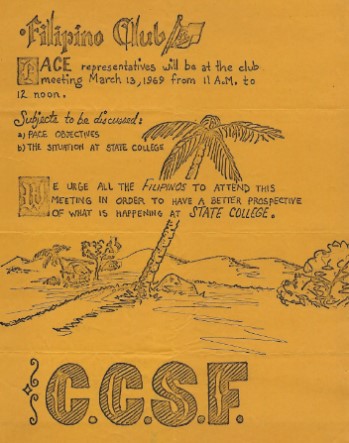 PACE organized support for these demands within the Filipino community which was as diverse as within other ethnic groups.  PACE membership consisted of about 70 students out of an estimated 125 students of Pilipino origin, coming from first, second generation and international students.  The Filipino community reaped the benefits of the community outreach which included tutoring to prepare youth for admission to SF State through the Educational Opportunity Program and ensured that students “stayed on campus” and completed their education.

In Spring of 1968, the TWLF was involved in a strike to increase the number of minority student enrollment, requesting that 400 slots be allocated to the TWLF members.  PACE got 40 and spent the summer Filipino high school and city college students to apply.  One of the famous recruits that summer was Dan Gonzales, who would become the College of Ethnic Studies longest tenured professors.  These activities occurred out of the PACE Bernal Heights office at 829 Cortland Avenue in San Francisco.

Pat’s personal recruitment approach was to tell the Filipinos he approached that they were members of PACE.  He described his approach this way:

So, I eventually went around and started talking to every Filipino person I could meet and see and started talking to them about, you know, “Hey, why don’t we get together and make some positive changes.  Why don’t you tell me what you need and what’s going on with you in school,” and began to get a better understanding of what’s happening to our Filipino students.  And eventually, every Filipino I would come across, I would say, “Hey, listen, you’re a member of PACE, now, don’t forget, you’re a member of this thing called PACE.”  And eventually, they were told so many times they were members, they became members.

The members of PACE who confirmed this approach are Bob Ilumin, Ronald Quidachay, Daniel Gonzales, and Juanita Tamayo Lott.

Pat’s character, his personality was non-threatening,” says Bob.  “So people would look at it and (say), ‘sure, I’ll be PACE.’”

“I joined Pat as a Filipino advocate when I met him in the commons,” writes Ronald Quidachay.  “and he said I was a member of PACE and later agreed to become a core member.”

“I was introduced to PACE in the fall of 1968 when Patrick Salaver invited me to recruit and tutor high school students for college,” says Juanita Tamayo Lott.

Alex Soria recalls responding “I’ve got two girl friends, a car.  I don’t need you guys.”  But at a later time saw some of the “brothers getting shoved around by jocks.”  So, he joined PACE “because there was strength in numbers.” 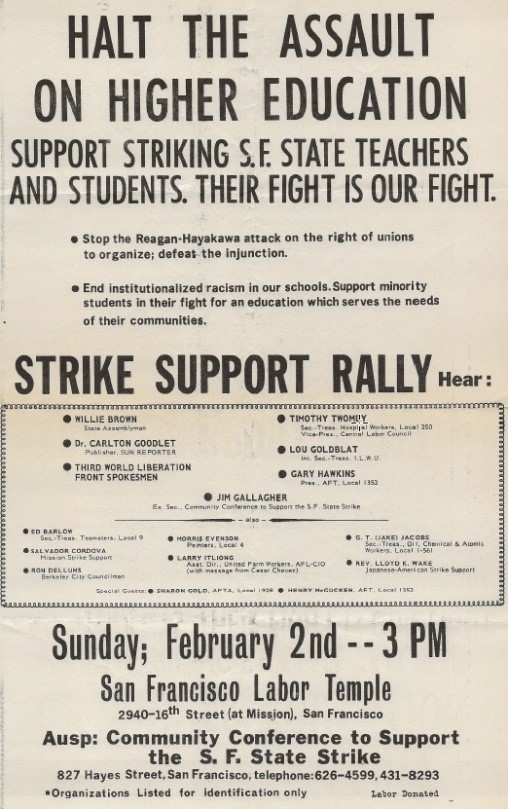 Pat would be a featured speaker through 1969, promoting the development of the Asian American Political Alliance student groups at UC Berkeley, UC Davis, and City College of San Francisco (CCSF).  Due to financial difficulties and burnout, Pat did not complete his bachelor’s degree and dropped out of SF State in the fall of 1969; however, in 2003 PACE at SF State presented Pat with an Honorary Degree.

While Pat was leading reforms and change on the SF State campus for Filipino/Asian-American self-determination and guiding educational opportunities in the predominantly Filipino communities of Bernal Heights and Central City, Estrella was leading Filipino cultural events and creating reforms to improve the lives of people of color in the City of San Francisco and State of California.

From the seeds of Pat’s grandparents, Arthur and Isabelo, the inspiration from Estrella and the support from his adopted father, Canuto, and his siblings, Pat led a coalition of Filipino students that created educational opportunities for Asian Americans throughout the United States.

The world is a better place because of Pat’s foresight and dedication to the cause of Filipino/Asian-American self-determination.